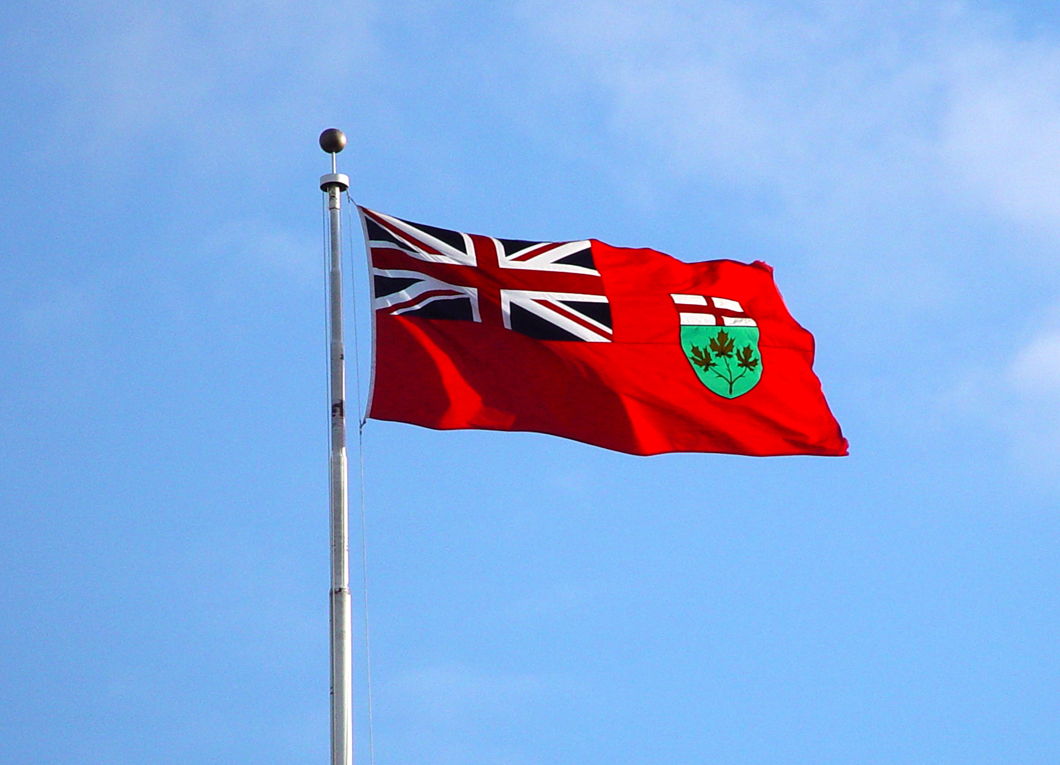 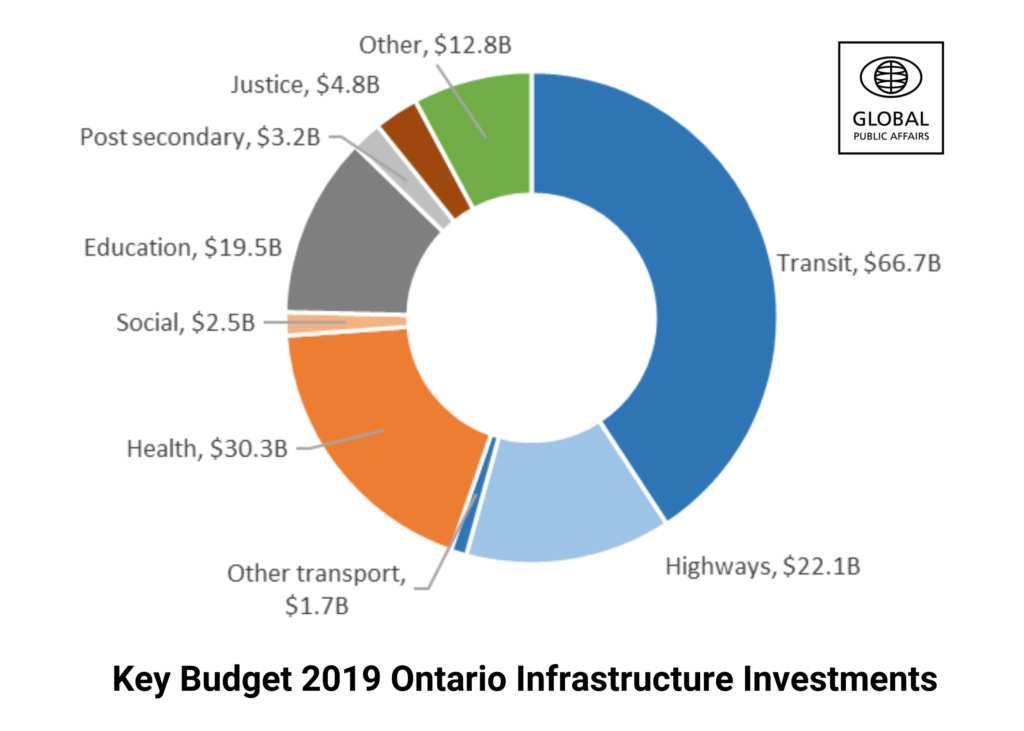 The Progressive Conservative government has set a fierce pace in rolling out their policy agenda since winning a majority at the June 7th election. With the 2019 Budget delivered to a backdrop of a reported $15 billion deficit for 2018, there were concerns capital funding could be cut. With the release of the budget infrastructure spending has remained on levels comparable with the previous Liberal government who had promised $182 billion over 10 years, with a projected $144 billion allocated for the next 10 years by the Ford Government. The government reported that despite higher previous commitments, actual infrastructure investments between 2013 and 2018 were 17 percent lower than planned.

Beyond the headline financial commitments which were dominated by investments in transit and transportation, with healthcare, and education, there were also indications of a shift in approach to planning and procuring infrastructure, as well as a focus on skills.

The day before the Budget, Premier Ford made a major announcement on transit in the GTA, with a commitment of $28.5 billion for four major subway projects, in addition to the major ongoing work around GO expansion and committing to light rail projects around the province.

Subways: In an effort to move projects forward that have been stalled the provincial government had agreed terms of reference for the upload Toronto’s subway to the province in February 2019. They justified this through stating that they have the experience, the legislative tools to expedite delivery, and greater ability to spread the cost over years – something the city is unable to do. The budget outlined that the upload would happen in two phases, the first stage will see legislation introduced in spring 2019 focusing on extensions and new lines; the second stage would see legislation introduced in 2020 focusing on existing infrastructure following due diligence on the state of existing assets.

The Ford government committed $11.2 billion to the subway projects, but Metrolinx CEO Phil Verster stressed the following day that the province would backstop the full $28.5 billion if other funding was not forthcoming from federal and municipal levels of government to allow the projects to move ahead. The budget outlined that they had held discussions with the Federal Government and had over $7 billion potentially available to support subway construction, with a desire to push the federal contribution up to 40 percent for new builds.

The four projects announced were:

To ensure timelines are maintained the province has committed additional funds for planning and design, and an aggressive program of pre-work. There was also an announcement that the province would begin exploratory work on a Sheppard Subway extension to from the existing Don Mills Station to Scarborough Town Centre.

Light rail: Within the budget the province recommitted funding for the Ottawa and Hamilton LRTs. Ottawa’s Stage 2 LRT listed the already committed $1.2 billion contribution of the province to the 44km extension that will extend to the west and south. Hamilton received a commitment of $1 billion for the 14 km line that will run from McMaster University to downtown. There was no mention of the Hurontario line in Mississauga despite a previous announcement from Metrolinx that the project would see the removal of the downtown loop and removing a bridge. The Eglinton East LRT and a Waterfront LRT also have fallen of the priority list.

Rail: The massive investments underway in the GO Rail network to transform the network from a commuter service into an all-day rapid transit network. Metrolinx will move forward with critical procurements and undertake additional work in 2019 on the rail corridors and leaving bidders open to electrifying the system or potentially using hydrogen fuel cells. Incremental improvements are underway to expand the GO service with 200 new weekday train trips along Lakeshore, additional services to Kitchener, and a new service to Niagara Falls.

The biggest shift in policy from the previous government is the move towards Transit Oriented Development. This market driven strategy aims to enable third party investment in station development. Mimico and Woodbine are the first of what is expected to be many station projects that take this approach. Metrolinx is also looking to develop food and retail opportunities at existing stations to maximize revenue.

The government is also examining rail and bus services in the North to meet transportation needs for both passengers and freight.

High-Speed Rail: One major announcement was that funding has been paused for the proposed high-speed rail connection linking London, Kitchener, and Toronto. They would instead undertake a study and launch a transportation plan for Southeastern Ontario in Fall 2019.

The province promised $22 billion over 10 years for provincial highways. There were no specific references to the possible GTA West project or the widening of Highway 7 near Kitchener. The province did highlight the following projects:

A major priority for the Ford Government has been to end “Hallway Healthcare”, with an estimated 1,000 patients receiving treatment in hallways daily on an average. The Province has promised $30 billion for health infrastructure, including a portion that would come from hospital fundraising efforts, $17 billion has been committed for capital grants over 10 years. There is also a major focus on adding 15,000 long-term care beds in sites across the province.

The province stated that work was underway or planned on 60 major hospital projects. This includes the following projects in planning stages or earlier:

The government is also embarking on a major reform process of streamlining health administration to consolidate six existing provincial agencies and 14 Local Health Integration Networks into a new single agency. This will impact long-term planning for capital spending across Ontario’s health system.

The province budgeted $19.5 billion over 10 years for schools, of which $13 billion will come from capital grants from the province to build schools in high-growth areas and renovate existing schools. The province also highlighted opportunities to encourage formal buying consortia and group purchasing initiatives. Post secondary institutions see a budget of $3.2 billion budgeted overall, but it is unclear what will come from the province and how much through their own fundraising. With Strategic Mandate Agreements between the province and the 45 publicly assisted colleges and universities expiring in March 2020 there is expected to be a shift to outcomes-based funding. This could include any funding for new capital projects.

Affordable Housing: The Province announced it would deliver a Housing Supply Action Plan along with legislation in Spring 2019. They are focusing on addressing five themes: approval time, housing mix, development costs, rents, and innovation. They also pointed to the development of a Community Housing Renewal Strategy.

Energy: The Ford Government again threw its support behind ongoing nuclear refurbishment at Darlington, and supports the continued operation of Pickering until 2024. The government is phasing out conservation and energy efficiency programs they estimate will save $442 million, instead focusing on investments that have the biggest impact. This follows a previous announcement that saw them cancel 750 renewable energy contracts which they estimated saved $790 million.

They also underlined their solidarity with the oil producing provinces by stating their support of pipeline construction, and opposing the Federal Government’s Bill C-69 which revises the environmental assessment regime for infrastructure projects within federal jurisdiction. They also highlighted spending to provide access to electricity in remote first nations communities, and natural gas in rural and Northern Ontario.

To encourage further consolidation and private investment in the electricity sector of the province’s 60 municipal electricity utilities, the province has extended tax relief measures on any dispositions to the end of 2022.

Resources:  The Ring of Fire remains a priority with the PC government looking to hold consultations on repealing the Far North Act, and amend the Public Lands Act. To unlock the resources and develop jobs in the Far North of Ontario the province is looking to helping unlock investments in all-season roads and electrical transmission. They have also expanded the Northern Ontario Internship Program to remove requirements on recently having graduated from a college or university.

Sport and Tourism: With the announcement that the new subway line would run to Ontario Place, the government also announced that there would be an expression of interest launched in spring 2019 to invite idea for Ontario Place. A Sports Action Plan was also announced that will focus on driving up participation, but also deliver modern arenas and fields.

The line-by-line audit commissioned by the Provincial Government shortly after their election recommended centralized procurement, capital asset management, and digital first. The government laid out its commitment to building a standardized approach to collecting and sharing data, and using it to make decisions to plan, prioritize and procure infrastructure. They are also looking to identify a new model for asset management based on best practices and optimizing its real estate portfolio.

The Ministry of Infrastructure saw a large increase in funding for 2019-2020 and will play a leading role in centralizing efforts together with Infrastructure Ontario.